about the Moving Mountains series

“Around the year 2000, I realised the scraps of stone I had leftover from the Bell Bowls reminded me of mountains, and the new series of Moving Mountains was born.”
Play Video

I grew up in a household that was sometimes turbulent. There were places I could find peace, and one of these was in our dining room. This room had a large window that gave an excellent view across Dunedin’s harbour to the hills on the North side, including Mt Cargill. My favourite viewing time was at dusk, when the hills would form this great dark mass as all the details faded and the horizon above them became sharper. I recognised them as beautiful then, and I recognise them as sublime now.

Alain de Botton, in his excellent ‘The Art of Travel’, defines the sublime as a feeling induced by land (or sea-) scapes that are impressive by “…virtue of their size, emptiness, or danger”. He goes on to describe how an experience of a sublime landscape can sustain us for many years afterwards, as it did for Wordsworth, who summoned up his memories of walks in the Swiss Alps as a salve for the despair he felt in the city of London. He described this in a letter to his sister:
“At this moment when many of these landscapes are floating before my mind, I feel a high enjoyment in reflecting that perhaps scarce a day of my life will pass in which I shall not derive some happiness from these images.”

To be clear, there is literally a very big difference between Mt Cargill and the Swiss Alps or the Sinai Desert that de Botton refers to, but I was a boy, and Mt Cargill was my Big Mountain then.
But what is it about sublimity that is sustaining? Why, I asked myself every so often over the years, do I keep returning to this image of the looming mountains; distant, impenetrable?
I became interested in psychotherapy in my twenties, and started to learn about things like the interpretation of dreams. I was attracted to the work of Jung, and his fascination for symbols. One way of looking at the symbol of the mountain is that it is the Father, or God; it may be that Mt Cargill and it’s neighbours on the skyline served as a picture of the father I pined for.

“…it is the vast spaces of nature that perhaps provide us with the finest, the most respectful reminder of all that exceeds us. If we spend time in them, they may help us to accept more graciously the great unfathomable events that molest our lives and will inevitably return us to dust.”

Then, around 2000, I realised the scraps of stone I had leftover from the Bell Bowls reminded me of mountains, and the new series of Moving Mountains was born. These were initially made with an angle grinder which gave them a very coarse, earthy texture, but over time they became more finely detailed, resulting in Moving Mountains 1.

In 2017, after relocating to Motueka, I established a relationship with Parker Gallery. Owner Leonie Allen improved my sales dramatically, so I felt sure enough of the idea to have the Mountains cast in bronze for the first time. Giltech Precision Casting in Dunedin made 10 sets, which all sold. I made a new version of the idea, which also sold out 10 sets. A third iteration sold out (2019); and now Moving Mountains 4, 5, 6 (sold out), 7, 8, and 9 are cast and released.
There is an odd inversion of the idea of the Mountain in this miniature form; instead of being vast and humbling, these Moving Mountains are small enough to pick up and play with.

Creative process (Use of technology and general expertise):
Sometimes I start with a drawing in my notebook, but often I ‘draw’ directly into Oamaru stone, using a handsaw, rasps, and a rotary grinder. I use an angle grinder often, and sometimes a concrete mixer. Physically my process is mostly cutting, grinding, and wearing down, but sometimes I use clay to form and build up, like when I’ve been making the Bell Bowl series lately.

I love the solid earthy warm nature of bronze, the smell of beeswax, the feel of paper. Note taking forms a critical part of my practice as an artist; dreams, quotes, ideas and drawings are all recorded and feed me creatively.

Some of the techniques involved in producing a set of Moving Mountains
I first think about which elements from previous sets that I wish to develop. This could be more abstract or naturalistic, more or less textured, heavier or lighter, and so on. Having a drawing (or an image in mind), I rough it out of Oamaru stone with a handsaw. Once I have the basic shape, I manipulate the planes to alternate concave and convex, initially with the saw again, and then with a rasp.

Cast from a hand carved Oamaru stone original, this oval bell has unique sound qualities due to it’s asymmetric shape. The ring changes subtly, depending on where you strike it. 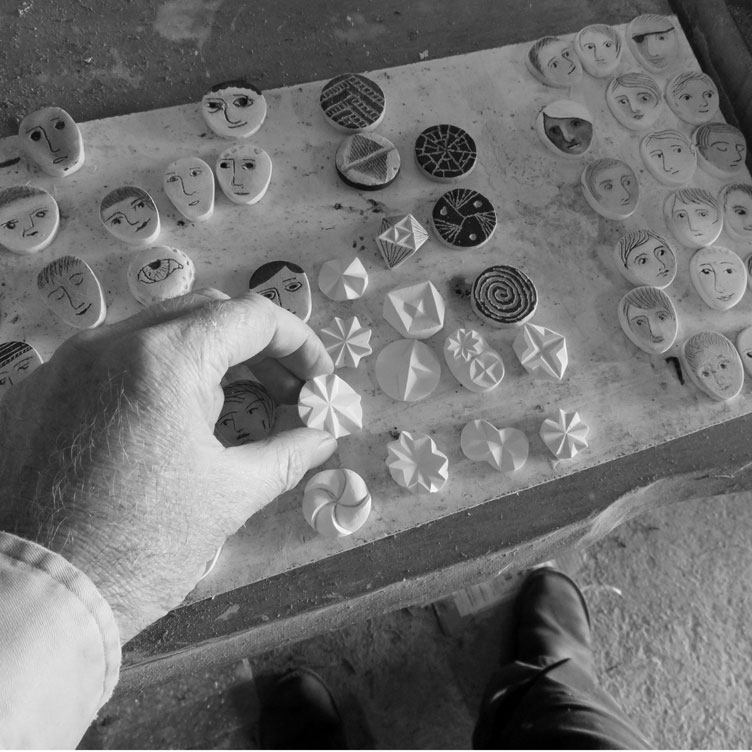 “Expression through a community of faces”